Quote of the Week – “You don’t know what you’ve got ’til it’s gone.”
Joni Mitchell

Sunday Musings
Abundance is such a lovely word. On so many levels. And yet, abundance is a dichotomy, a paradox, an oxymoron.

People can have an abundance of cash, enough not to have to earn a living because the cash makes its own money.

People can have an abundance of house, more house than they can take care of without help.

People can have an abundance of stuff; some stuff might be of fine quality, some stuff not so much.

People can have an abundance of time when they can’t find work to earn a living.

People can have an abundance of body, being tall or voluptuous.

People can have an abundance of pain.

An abundance of trash or garbage.

An abundance of challenges.

An abundance of indecision.

An abundance of troubles.

An abundance of weeds.

My neighbor had an abundance of tree. This tree was large enough when we moved in but trees, by their very nature, don’t necessarily stay small even when they are dwarf varieties. Over the last twenty years it’s far outgrown the space it was in and could have wreaked damage on a half dozen houses if it had decided to cast its branches to the wind.

I have an abundance of patience. Sometimes it is forced patience, as in I have no control and there is nothing I can do about it. I’ve waited through twenty years and four owners of the property with the tree. This owner finally decided the abundance of tree was too much abundance.

This last Friday we watched the tree come down. It took an abundance of professional tree removers to do so. One skilled fellow climbed the tree, tied off branches, chain-sawed through them, and lowered the cut branches to the ground with the guide ropes. A team of four or five men caught the tree chunks, cut the branches into manageable sections, and hauled the sections out to the chipper parked on the street. They kept up an abundant stream of communication as they did so, my Spanish just good enough to be able to laugh when I heard them cheerfully cussing at each other.

I enjoyed the show abundantly. Took my breakfast and coffee outside to watch. Spent the day. Caught a few pictures. I was abundantly fascinated by the process and abundantly amazed at the skill of the workers.

The rain sprinkled abundantly while I watched. The sun came out as well. One downpour came at the perfect time for the workers to take a well earned break. The universe shed some tears on us mourning the passing of the tree.

The tree was in a dangerous place. It was precariously out of proportion with its space. The trunk had divided into eight stumps each with its own wild meander of branches. It was so abundantly unruly it was self-destructively growing into itself, unattended for so long branches were growing through trunks eating its own bark off. It has been needing removal for twenty years. It was a matter of time until the tree and nature would fling some part down upon the earth. In most cases I am the Lorax, I speak for the trees. This tree outgrew its space and became a victim of safety and progress.

The little family of squirrels that live in my yard vacated the tree quite early on. The tree wasn’t their main home so no worries there. They weren’t displaced, but it was a major part of their yard-to-yard highway, so they will be establishing a new furry rodent route soon after the chain saws go away. The crows have an abundance of neighboring trees to choose from, and since they enjoy an abundance of mobility they will choose new trees in which to perch to alert me to the morning light. A few smaller black birds kept circling the tree as it was coming down like they could not believe what was happening.

Using the sides of his feet to hold on and using a chainsaw in mid-air.

The tree climber had an abundance of safety ropes and harnesses. He had an abundance of knowledge, skill, and confidence. He had an abundance of time to do the job safely, and he used those minutes wisely tying himself off, tying the branches securely before he cut, gauging his next steps carefully. It’s quite a skill to balance on the sides of your feet from the spikes strapped to your boots, to swing from branch to branch when your safety rope is tied only to a six inch diameter branch, to wield different sizes of chainsaw in mid-air because the diameter of this stump requires a much larger saw than the last. Many of the trunks were as big around as the cutter; one of the trunks was at least twice his width. He created an abundance of sawdust.

The helpers had an abundance of energy as they kept up with the cutter, hauling the branches through the side yard and out to the chipper, cleaning as they worked picking up the odd little limbs and raking leaves; they were steady workers and did not dawdle. I could see the largest branches over the top of the fence as they were dragged through the yard looking ever so much like an endless parade of leaf dragons marching toward an unknown enemy. They created an abundance of wood chips. 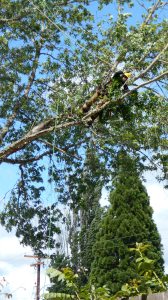 Some of his work was parallel to the earth.

In an effort to control nature a human decided the tree was more a danger than a joy. I knew exactly what the tree was, but it wasn’t my tree to make a choice for. As the tree came down I thanked it for its shade and wished it relief from its own weight. Now in that part of my yard I see an abundance of sky. At the end of the day the tree was removed the sky carried a peculiar shade of sickly muted peachy-pink color reflecting from the bit of sun on the clouds over the area, a sort of softly angry color against the pale blue of late spring evening skies.

One of the last bites.

Spider webbed in the last of his prey.

Now I have an abundance of sadness for the life of a living thing which no longer exists.

I saw it. I believe it. Abundance is a hard thing. Like grief.

Color Watch – colorful attractions in my neighborhoods this week – Shiny pink and gold of honeysuckle.

Not so subtle blend from yellow to pink edges of this rose.

I love how this purple violet defies the aggregate every year by blooming through the crack.

A golden yellow rose against the gray concrete wall.

Current View – {These are only my opinions about movies and books, but don’t let me stop you from trying these reviewed items yourself; your opinion may differ.} The Wanda Sykes comedy special on Netflix Not Normal (2019, rated R). I do love me some good stand-up comedy. * The Women on the 6th Floor (2011, not rated), in French with English subtitles, a man in 1960 Paris finds empathy with the maids who live in the rooms above.

Currently Reading – Finished The Seven Husbands of Evelyn Hugo (2017, fiction) by Taylor Jenkins Reid (American author), and the love of her life was not one of her seven husbands. No other spoilers as this is a great summer read with a couple twists at the end. * The Keeper of Lost Things (2017, fiction) by Ruth Hogan (British author), starts with a slower pace about an older man who picks up found objects, and catalogs them, and the young woman he hires to help him. * Plan Your Prosperity: The only Retirement Guide You’ll Ever Need (2013, personal finance) by Ken Fisher (American author). Money isn’t easy if you’ve never had much. I’m not familiar with many of these financial terms (I know what investing means I’ve just never had money to invest), but I’m always learning. Understanding more about money, how it works, and how to save it even when poor has its own value.

1 Response to Gratitude Sunday: A Wild Variety Of Abundance