Quote of the Week – “My mother always taught us that if people don’t agree with you, the important thing is to listen to them. But if you’ve listened to them carefully and you still think that you’re right, then you must have the courage of your convictions.”
Jane Goodall

Sunday Musings
Not to be too obvious about it, but it’s Mother’s Day. Last year we were still reeling from the devastating effects of the 2016 presidential election. This year we are seeing a surge of women standing up for what they believe to be right, standing up to protect themselves and their families, standing up to the man-ocracy that seems to want to control everything about women including how we think and what we do with our bodies. We are not possessions; we are not property; we are not chattel; we are not things to be used. We are individuals with our own minds, our own bodies, our own intelligence. And if it weren’t for us, men would not be in the elite position they think they have the right to claim.

I’m not fond of Mother’s Day. Don’t get me wrong. I am fond of mothers. This world would never have survived without the service and labor of women, in all the iterations of that word labor. What I don’t like is the contrivance to commercialize a day in the name of women. And it marginalizes women who do not have children for whatever reason, as if producing children is the only value women have, which is patently wrong. While it is lovely to be remembered, most of us don’t need another box of candy, or vase full of flowers, or jewelry, or a potted plant to kill, or even dinner out. That’s just more stuff. In our consumer culture we have to be careful about the buy-in supporting expenditures, when mothers should be honored every day, and can be honored with the most precious thing we have available to us: our time.

Universally, who was your first protector, your first defender? Before you even landed on this earth you were carried in the warm sea inside the body of your mother. In the best scenarios you were nurtured from the first moment. Your mother labored to keep you safe from harm. It’s likely she still does no matter how old you are.

It’s not a mother’s job to produce mini-mes, or little friends. Mothers are responsible for making productive citizens, for instilling morals, for teaching children to be confidently independent. It’s the hardest job in the world, and if it can be done with love so much the better. There are no instruction manuals. In many cases, we make it up as we go along, remembering our own mother’s and grandmother’s advice.

Mothers often have a unique sense of what you need. The year I was pregnant I was struggling. I am the breadwinner in my family and with a baby coming I was questioning how I was going to work and care for baby and take care of the disabled hubster as well. Hubster and I had an argument in the car. I was driving because he didn’t have a driving license at the time. I couldn’t deal with his drama, so I pulled over, and being dramatic myself, I kicked him out of the car, then drove to the store which had been our destination and sat there crying my eyes out wondering what the hell I was going to do.

Suddenly my mom, who at the time lived two hours drive away, tapped on my window, showing up seemingly out of nowhere. She’d come to town for a quilt show and had seen the hubster walking down the road. He suggested I’d be where I was and there she found me crying. She climbed into the car and wrapped her arms around me. We sat there while I sobbed in her arms, no words to express my concerns, as I tried to figure out how she’d gotten the telepathic message I was in distress. Mother radar. I was 38 years old, supposedly old enough to take care of myself and old enough to be a mother. She was amazing and I am half the woman she was. But I’ve told this story before.

This year I’m suggesting something different because of the odd political climate and the destruction of norms we are experiencing in this historic time. Let’s turn Mother’s Day around and instead of children celebrating their mothers, Women (you don’t have to be a mother to do this), let’s celebrate our children in a special way. Let’s teach them how fierce motherhood is. Let’s stand up for our children. Let’s show them how to stand up for themselves and for their children. Let’s teach them how to not be complacent and to live every moment. Let’s teach them to listen to others and to think beyond themselves. Teach them right from wrong. Teach them morals and ethics. Teach them to succeed to the benefit of each other, not at the expense of others. Teach them we are only as good as the weakest and least of us. Teach them to lift each other up, not just themselves. Let’s organize resistance, letter writing and phone calling campaigns, voter registration drives, and teach our kids while we do it. Let’s teach them non-violent resolution and love for others who are not like us. Let’s run for public office and teach them women have the knowledge to help their communities and their nations. Let’s teach them our voices count.

I’ll leave you with the fierce words of Julia Ward Howe, written in 1872, after she’d had her fill of men promoting a Civil War which killed beloved children in the name of abusing people of another race, other women’s children, then proceeding to rig the economy in favor of the old boys club. We’ve been fighting for peace, personal integrity, and social justice for so many years. Mothers: don’t ever give up. It’s our babies and other women’s babies we are fighting for.

Arise then…women of this day!
Arise, all women who have hearts!
Whether your baptism be of water or of tears!
Say firmly:
“We will not have questions answered by irrelevant agencies,
Our husbands will not come to us, reeking with carnage,
For caress and applause.
Our sons shall not be taken from us to unlearn
All that we have been able to teach them of charity, mercy and patience.
We, the women of one country,
Will be too tender of those of another country
To allow our sons to be trained to injure theirs.”

From the bosom of a devastated Earth a voice goes up with
Our own. It says: “Disarm! Disarm!
The sword of murder is not about the balance of justice.”
Blood does not wipe out dishonor.
Nor violence indicate possession.
As men have often forsaken the plough and the anvil
At the summons of war,
Let women now leave all that may be left of home
For a great and earnest day of counsel.
Let them meet first, as women, to bewail and commemorate the dead.
Let them solemnly take counsel with each other as to the means
Whereby the great human family can live in peace…
Each bearing after his own time the sacred impress, not of Caesar,
But of God –
In the name of womanhood and humanity, I earnestly ask
That a general congress of women without the limit of nationality,
May be appointed and held at someplace deemed most convenient
And the earliest period consistent with its objects,
To promote the alliance of the different nationalities,
The amicable settlement of intentional questions,
The great and general interest of peace.”

Color Watch – colorful attractions in my neighborhoods this week – The depth of shaded blue and white iris.

Pink and gold, a wealth of flower jewels. 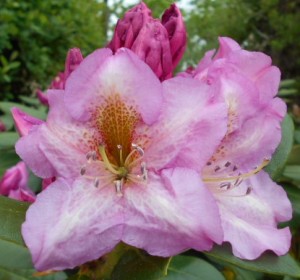 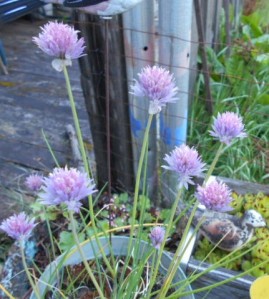 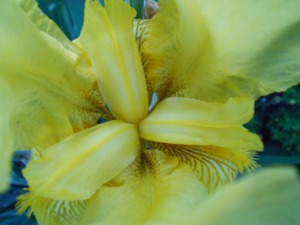 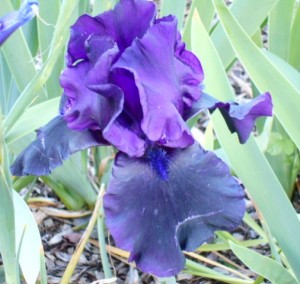 Current View – {These are only my opinions about movies and books, but don’t let me stop you from trying these reviewed items yourself; your opinion may differ.} Suffragette (2015, rated PG – 13) a dramatization of British women in 1912 using political activism to the point of violence after 50 years of peaceful work toward women’s right to vote. We women are immersed in one more phase of the struggle for our rights, again, still, today. Women have been calling for change for a millennia of generations.

Currently Reading – In honor of Mother’s Day, I’m reading Margaret Atwood’s Bluebeard’s Egg (1983, memoir), a memoir about growing up with her mother and stories she remembered her mother telling her about growing up. * I’ll Be Gone in the Dark: One Woman’s Obsessive Search for the Golden State Killer (2018, true crime) by Michelle McNamara. The book, of course, is incomplete as the murders had not yet been solved at the time of the author’s death. Too bad the perpetrator wasn’t found until after McNamara died. She would have been thrilled.