Gratitude Sunday: A Rose By Any Other Name

Sunday Musings
“I contradict myself. I am large. I contain multitudes.” Walt Whitman

Labels. What do they mean? She is White, he is Black, they are Asian. He is Christian, she is Muslim, they are Pagan. He is evil, she is kind, they are indifferent. She is he, he is she, they are indefinite. Kookookachoo. Different blossoms on the same bush of humankind.

I don’t care who you love. You should love who you love. I don’t care who you have sex with. If you are lucky enough to have someone in your life you trust enough to share your body with good for you. I will honor that you have a partner, whatever that looks like for you. I don’t need to know the details of your relationship or the details of what you share sexually. That should be private between the two of you (or more of you if that is your pleasure). I don’t need to know that, it’s none of my business. It won’t make me approve of you or disapprove of you. And I won’t be sharing my details as well. It’s none of your business.

We are, all of us, of so many minds. Inside me I contain thoughts I would never act on. The person I present to the world I want to think of as kind and caring, but this is often misperceived by others. This duplicitous nature exists in all of us whether you admit it to yourself or not. Who is right and who is wrong? Maybe all of us, maybe none.

I watch my cat outside. He is a rescue cat. We found him in a tree in our yard, put food out for him, and within a couple days he moved in. He is a long haired cat but came to us nearly naked, with skin lesions, a flea collar so tight it had bitten a wound into his skin. We cut off the collar, had him “chip read” (no chip found) at the local vet, gave him a flea treatment, and gave him food that began to relieve his skin condition. He had a broken and infected tooth. Either he’d been hit by a car or kicked savagely. We had the tooth removed and treated the infection. I think he ran away from his last home, from an intolerably abusive situation, in search of a safe space, and he found it here. He is a beautiful and well trained cat; he does not jump on counters or tables, asks to be let in and out (only soiling inside once – our fault), and comes when he is called.

When he is outside he is constantly on alert. He stalks prey and is wary of the same. Our home is free from mice, rats, and snakes because of his surveillance. If he sleeps in the warm sun in the grass or on a chair next to the house it is fitfully, with one eye open against predators. He will chase off other cats and dogs to protect the territory he considers belongs to him, his safe space, his sanctuary.

Indoors he sleeps deeply and soundly, snoring, secure in the knowledge there are no predators and no competition, neither animal nor human. He will not be attacked by the snake in the grass or usurped by another animal, and he will not be hit or thrown by the humans who care for him.

Today, many of us are like my cat. When we leave our homes we are constantly vigilant against being hurt by others either mentally or physically. In our homes we want to feel safe and secure in the knowledge of our safety. For some, even our own homes are not a safe space. Should we not have this feeling of safety both in our homes and out? How distressful to live life constantly aware of difference and the violence it may bring. Shouldn’t we honor those differences without violence? Why should a belief system or skin color or gender difference create a climate of hatred? I’ve got news: there is not one other person in the world who is just like you. All others are others.

I do not believe any God or goddess or universe ever said difference is to be greeted with violence and hatred. You can read the words of MEN and though lip service is given to them being divinely inspired I have some doubts. The Bible, the Quran, the Torah, Confucius, and all the others, these are the words of men under the auspicions of God, in other words, somebody claimed they were inspired by God. I don’t believe even these words of men were meant to incite hatred and violence because of difference. Note I say men, as women were rarely taught to read and write when these items were written. Nobody is born hating or knowing how to hate. Hate is taught through the words of men and the distortions men create from the words of other men. It is fear of difference that causes division between people, the greed and divisiveness money creates, and the perpetuation of might is right that is destroying our cultures and societies.

If I belonged to a church it would be the church of caring kindness, where difference is perceived merely as another body. Another. Body. I would never tolerate a church of hatred, evil, and violence, or eliminating a body for mere difference.

I would be slightly different than my cat, who can dispatch predators. I could not dispatch or hurt another human, and I would be in a difficult place having to defend myself from violence and hatred. But my home is my sanctuary, the one place I should feel safe and secure, and if your notion of difference creates your need to violate my sanctuary, you may see my thorns which I rarely show.

Stop hating. Don’t be violent. Don’t raise your voice to your wife or your husband or your children or against others who aren’t like you. Don’t be afraid of or hate others because they are different. Be large and honor your own personal multitudes and the multitudes of others as well. Roses come in all shapes and sizes and fragrances even on the same bush; they are single-petaled, floribundas, ramblers, pioneers, teas, hybrids, old-fashioned heirlooms, some with thorns, some without, and so many others. By any other name we are people. Be like a rose. Disperse a sweet fragrance. If we all behave like roses it will be a sweeter world.

Color Watch – colorful attractions in my neighborhoods this week – how I love the blue and pink and purple colors and abundance of hydrangeas. 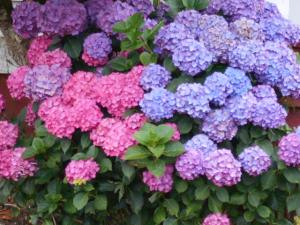 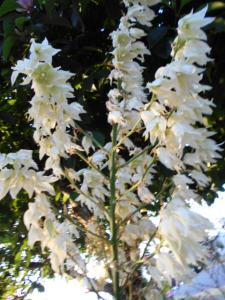 Baby blue bachelors buttons growing wild in every crook and cranny: cracks in the sidewalk, beside the road, anywhere it can get a speck of soil. 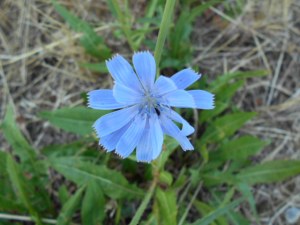 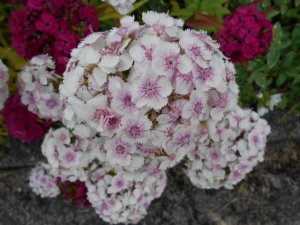 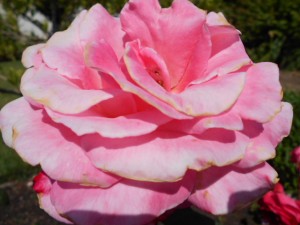 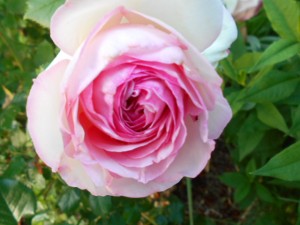 Current View – Season 3 of Ray Donovan (2015, not rated) a Showtime TV series, compelling drama of a family in Los Angeles and the secrets they keep and reveal. * Tangerine (2015, rated R) called a comedy-drama, and I’m glad it was short as it was one of the oddest dramas I’ve spent my time watching. Way too much girlfriend-boyfriend yelling at each other/drama for me. Not even going to spend my time describing it, for me it was boring and overly dramatic. Meh. * Sleepwalk With Me (2012, rated PG-13), a young comedian cannot admit to himself or his longtime girlfriend that he doesn’t want to marry and begins to sleepwalk, then uses the experience in his comedy sets. {These are only my opinions, but don’t let me stop you from trying these reviewed items yourself; your opinion may differ. Viva la différence!}

Currently Reading – What Belongs to You (2016, fiction) by Garth Greenwell, a voyeuristic view into male gay culture and the destruction of the soul through disease and marginalization. I believe you love who you love and it has nothing to do with gender, but I don’t care to hear about private sexual details whether hetero or homosexual. I know the names for body parts and all the mechanics; you are not going to shock me or titillate me. I want to read your love story, but what is art without the body? I honor the author’s attempt at expressing the obsession of desire of the main character, and though I felt like a Peeping Tom with pornographic exposure, this is an important story nonetheless. However, the synchronicity of reading this particular book during and just after the horror of the Orlando tragedy does not escape me. The division of difference and otherness has always distressed me as all any person wants in this life is love and acceptance. The Magic of Math: Solving for X and Figuring Out WhY (2015, mathematics) by Arthur Benjamin. While the author states this book is for mathematicians and laymen, he goes from 0 to n in 6 pages and loses me at n on page 6. Though I was an A student in math clear through statistics when I went back to college, my understanding of math is rudimentary and primitive at best. I love numbers and patterns and figuring but despite my hopes for real math fun, the magic was totally lost on me. My eyes glazed over at the numerical equations and the glaze multiplied when the equations added algebraic/alphabetic designators. My brain boggled at the explanations (in English!) of quadratics, factorials, polynomials, and the whys. Mr Benjamin’s math magic requires the memorization of another set of rules and principles far beyond my understanding of basic math and reminds me of the new common core math being presented in schools today and the old “new math” presented back in the 1960s. I continue to slog through thinking I may pick up some nugget along the way. It has been a treasureless exploration, yet though I thought I was too stubborn to give up, I finally bailed about page 69. The magic failed me. Yes, concurrently.