Sunday Musings
There is no two ways about it: transitioning to a different job or work is hard work, especially when it is thrust upon you. It’s a full time job in itself. The tension is high living with zero income, when you are housing or food insecure, relieved only when new employment, work, or income is obtained. It’s another element of change being the only constant.

It’s especially hard when self-confidence is on the edge in the first place, and harder when that flimsy grasp of self-confidence is shaken by one’s last employment experience. Throw some anxiety into the mix and you can have one big body full of tension and indecisiveness. I read recently people who are constantly anxious actually have different brain chemistry, anxiety begating anxiety, so to speak. I can believe it.

My first encounter with anxiety began at age 5 and has only worsened over the years. My school district did not have kindergarten, but I was ready for school, so I was placed in first grade in the warehousing system we call public school. This was a shock going from the comfort of my family home into a room full of strangers. Every day. I made friends with the blind girl in class. She’d been born too early and had become blind from the pure oxygen pumped into the incubator. Classmates, strangers I barely knew and didn’t know any better than her, made fun of me because we were friends. I didn’t know it was “wrong” to be friends with someone who was not as abled as we were. She was nice, I liked her, she seemed to like me. She was learning to read with her fingers as I was learning to read with my eyes. I couldn’t just stop being friends with her because other people thought something less of her for whatever reason. Of course, we now recognize this as bullying, but with all the recognition and knowledge, bullying seems more pervasive than ever.

No wonder people get high blood pressure and heart failure. A disturbing fact is more workers at the lower levels have these diseases than upper level management. Makes sense to me. Despite the myth of administrators being under more pressure, managers have the money, security, and control, workers have the insecurity and the poverty. I heard Melissa McCarthy (one of my favorite celebrities) say on a recent talk show she is never nervous. I was actually jealous of that; how does one achieve that level of confidence? It’s not about appearance, it’s about presentation.

Just playing with words here because I am frustrated by the myth of choice, but think of the tune to John Lennon’s Imagine. You may say I’m a whiner, but I’m not the only one. Someday you may join us, and the world will live as none. It is no comfort at all to think of other people experiencing the same anxieties. We should all have a sense of security and comfort in this world like the United Federation in Star Trek where each person has value and is worthy.

Generally I’ve learned not to mind change so much. It is the way of life. But when that change involves employment, particularly when the choice was not yours, it messes with your sense of security especially if that was tenuous in the first place. I’ve always been one of those people who get up, clean up, dress up, show up and then do the best job I can. Sometimes even that doesn’t seem to make any difference. 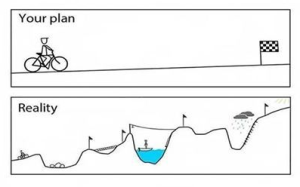 It’s also hard staying connected to family and friends during hard times and transitions. Nobody likes being around a “Debbie Downer”, but when anxiety and transition are your current experiences how do you present a cheerful face? You pretend. You become an actor pasting a smile on your face, acting as if all is fine, as if there are no challenges in your life, as if you are getting along well, because nobody but you is going to pick you up and help you in this world unless you do. If you don’t pretend, you alienate the very people you need help, understanding, and support from, and who ultimately need the same from you. How artificial is pretending? Once again the self-sufficiency model of American society bites us in the butt. You shouldn’t have to succumb to devastating illness or poverty to have support from family, friends, your community, your nation, nor should you always have to be the bluebird of happiness to have the approval and support of others.

Persistence prevails. You must keep on regardless, pretending, smiling, working at getting work, tweaking resumes and cover letters, filling out endless applications. You must be creative in the face of adversity and maybe with some luck and tenacity you will come out the other side of change with a new unconstant and a smile pasted on your face.

Color Watch – colorful attractions in my neighborhoods this week – Lilacs. 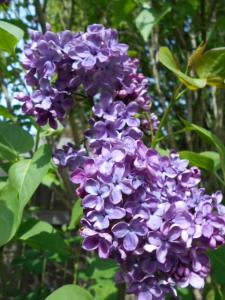 Did I say how much I love lilacs?

Can you spy the teeny tiny critter on this lovely LILAC?

Current View – The Captive (2014, rated R) with Ryan Reynolds, a twisted and disturbing movie about a child abduction and her rescue 8 years later. Not recommended for the tender hearted. * Binged through season 1 of Ray Donovan (2013, not rated) a crime drama from Showtime, with Liev Schrieber as an LA “fixer”, crime slang for someone who arranges crime cover-ups, while in the employ of two prominent attorneys. Intense and violent, but compelling characters including several older actors such as Eliot Gould, James Woods, and Denise Crosby. * Season 2 of Unbreakable Kimmy Scmidt (2015, not rated), a Netflix series of crazy, wacky, wild humor, produced and directed by Tina Fey. * Continued Death in Paradise (2011, not rated), no spoilers, but big changes in the beginning of season 3. You’d think from all these titles all I do is view, but I don’t allow myself to sit down to view until 9:00 pm or later. Maybe I stay up too late.

Currently Reading – The Faraway Nearby (2013, essays) by Rebecca Solnit, an exploration of narrative about grief, empathy, and imagination. Fascinating how she weaves the separate essays into whole cloth. Finished The Girl who Fell from the Sky (2010, fiction) by Heidi W. Durrow. Well written, quick read, surprise plot twist at the end. Second Act Careers: 50+ Ways to Profit from Your Passions During Semi-Retirement (2013, career changes) by Nancy Collamer. Good information about what, not so much about how. Yes, concurrently.