Gratitude Sunday: My Father, My Sun

I see those eyeball rolling. I don’t know everything yet (yay!) so I had to look it up (available resources – double yay!) and I discovered it’s pretty easy math.

Father’s Day is, of course, a societally contrived “holiday” having been around since 1910 and only officially sanctioned as a holiday in 1972 by Richard Nixon. 1972 doesn’t seem so long ago because I’ve been around longer than that but I remember celebrating both Father’s Day and Mother’s Day as a young person whether it was “officially recognized” or not.

Here’s the math. We are going to use percentages, averaging, and rounding concepts for those of you who hate math – and if you do, bear with me; I’m hoping this will be a little bit of fun. Father’s Day is the third Sunday in June. Summer Solstice occurs anywhere between June 20 and June 22. The 22nd is never Father’s Day being one day too far out on the calendar to be a third Sunday.

Since 1990, Summer Solstice has occurred on June 21 in 1992, 1998, 2009, and 2015 or 4 times in 25 years. We deduce, then, in 100 years the two holidays coincide an average of 16 times, or 16 percent of the time in a century. If we use further averaging we would expect the coincidence every 6.25 years, but the earth, foxy rotund planet she is, and the sun, firey god-devil he is, don’t quite work it out that way. There is not an even pattern so the coincidence is much more random (random is good, too), but both Father’s Day and the Summer Solstice are predictable. If you are interested, charts are available on-line, though I am not going to recommend one in particular.

Interesting to me is we chose June to celebrate Father’s Day. Solstices have been recorded for thousands of years, and June has more daylight hours than any other month of the year, so June should be celebrated as the month of the sun anyway if our ancestors were thinking a bit. 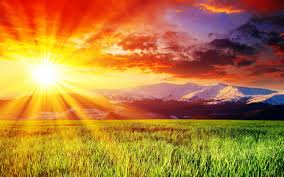 Mother Earth provides the place for abundance: the soil, the seeds, the fecundity. But without the sun and its heat and its ability to make or take water we would have no abundance; we would be static, remaining the same, without growth or change. We are lucky on this planet as abundance is good, but abundance requires care as well. Simply put, if we destroy the mother earth, the father sun will be sad and lonely when she dies.

My dad was like the sun to me. Mom was always there, always around, having babies, tending children and the house, making food, making sure we were all clean and fed and clothed and educated. I was grounded in her, she was my earth. Dad appeared daily like the sun, and whether he was cranky waking up or tired from working, he was a bright ray, a different sort of light than Mom. He ranged out there into the big vast world; he was a part of that world, a contributor, a producer, an earner of money, provider of all that fueled our family world.

I can’t tell families how to run their lives. Each family has to make that up as they go along with whatever works for them. But I am saddened by men and young men who cannot find gainful employment or do not have the skills to find jobs let alone work them. I am saddened it often takes two incomes just to put a roof over heads and food on the table. I am saddened that often the higher income is earned by the woman in the family and the changes in relationship dynamics this can cause. I am saddened by the divisiveness this change in society has made between “stay-at-home” moms (all moms stay at home; it is where they live) and “working” moms (all moms work; that is their definition). (Some moms choose to work outside the home also, other moms are forced to work outside the home whether they want to or not just to make ends meet.) I am saddened at the burden men and women feel these days to provide for their families. I am saddened by men who feel the only alternative is to abandon their families to the welfare system. I am saddened we think we need so much materially we sacrifice time with our families. I am saddened after 239 years of being The United States of America, we haven’t figured out how to support fathers and mothers and families, the very people who make America.

Times are different, but are they so much? Dad provided us with a two bedroom/one bath World War II tract home of about 900 square feet on a suburban 50′ by 100′ lot. It had everything we needed including a garage, a laundry area, and a well tended vegetable garden. Who needed a dining room when you could comfortably squeeze six people around a table in the kitchen? That was all the space you needed to cook and serve up a hot meal and have a family conversation while eating it. To Mom and Dad their cozy little home was luxury compared to the tiny ramshackle places they’d been raised in. And the garage was prime real estate becoming a stage for four kids to play on rainy days, a winter place we re-finished a boat used during summer, and after I turned 12 remodeled into the “master” bedroom so the boys and girls could have separate rooms for our oncoming maturity. We all survived and thrived just fine without separate bedrooms and bathrooms. We learned how to share and take turns. Privacy was limited, but modesty was encouraged.

We watched one TV in our little living room, together, the programming dictated by Dad. It was his TV after all and he let us watch it during the day while he was gone, viewing times dictated by Mom. We shared one land-line telephone, which became interesting when all 4 of us were teenagers. We shared one bathroom, and yes, it can be done, though with some dancing.

This solstice as I think about my dad I am grateful for the light he provided for me and my family. He was intelligent and quirky, he had his moods, he was an emotional man – men have emotions too; never be ashamed or embarrassed by being true to the emotional person you may be – and in his way he cared deeply for his family. He was rather like the sun having cloudy days and rainy days and full frontal sunshine days and totally in his best element when he was outdoors.

So to celebrate Father’s Day, please enjoy this lovely flash mob version of Here Comes The Sun courtesy of my faves, The Beatles. 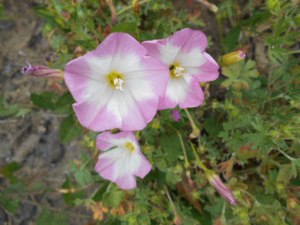 purple blossoms vaguely remind me of buddleia but this blooms on a long single stalk not a bush, I’d like to know what this is; 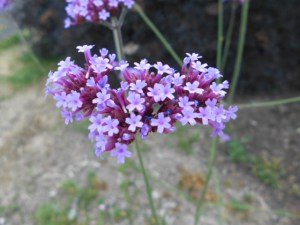 lavender bush so heavy with blossoms it can’t stand up straight, buzzingly alive with bees; 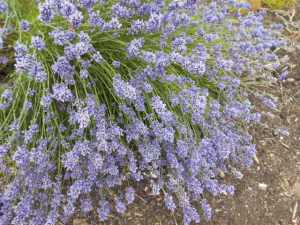 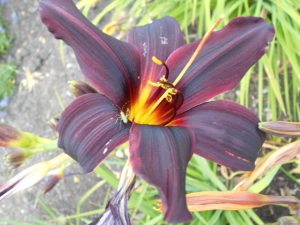 my plum showing its lovely red-purple balls of fruit; 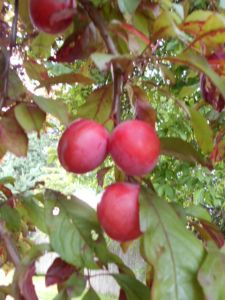 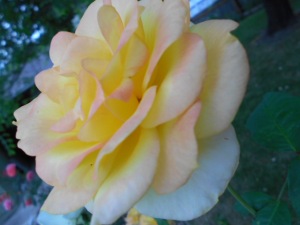 red crocosmia which I confuse with freesia, a similarly shaped flower in different colors than crocosmia, which looks more exotically bird like; 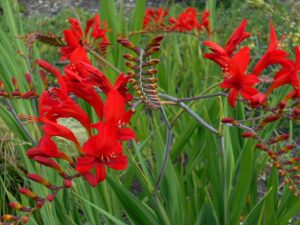 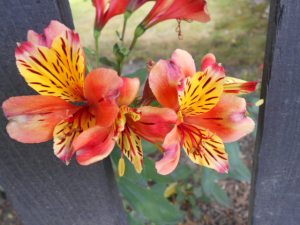 Currently Reading – Report For Murder (1987, mystery fiction) by Val McDermid; Can They Do This To Me: My Reluctant Introduction to the Legal System (2012, sibling rivalry) by Larry Landauer; Undeniable: Evolution and the Science of Creation (2014, science) by Bill Nye. Yes, concurrently.

4 Responses to Gratitude Sunday: My Father, My Sun